There was a man who claimed to be Johnny Gosch who was arrested as he yelled out who he said he actually was (http://www.northernsunprint.com/page/content.detail/id/509859/Man-identifying-himself-to-police-as–Johnny-Gosch–is-charged-By-John-Speer-Central-Iowa-Press.html?nav=5003). The picture was well shared around the Internet of a crazy looking man in the mug shot. Sadly, several years later this man was under the care of a local hospice for Lymphoma. Is there anyone in the whole case to trust? John DeCamp wrote a book called, The Franklin Coverup, where he indicated his many roles in public, controversial cases he mainly lost. He admitted to being in the Phoenix program in the Vietnam with the future director of the CIA, Colby, who also later admitted the reasoning behind MK-Ultra was they were afraid of the Russian’s advances in technology. Fear, this is not a surprising reason for equivocating; with no moral compass except allegiance of God under country, as pointed out by Jolie’s character in the movie, The Good Shepherd, about the dark beginnings of the future CIA.

Two years later Eugene Martin was also kidnapped (https://iowacoldcases.org/2013/08/linked-by-lost-lives-eugene-martin-dennis-clougherty-and-helen-morrow/), working for the same paper and under similar circumstances in that the older brother did not accompany him that day. In Gosch’s case his father, who has been heavily implicated in at least knowing about the kidnapping ahead of time, did not accompany Johnny that day he was taken. As Paul Bonacci indicated he was the first to rape Johnny. Bonacci helped procure victims for the Franklin Sex Scandal, including Lawrence King, president of the local bank in Omaha, caught up in the Iran-Contra money, child, and drug trafficking involved in covering up the dealings (https://www.youtube.com/watch?v=1nx6ou4rfX0 – full America’s Most Wanted show that featured the detailed abuse, and prison guard’s house in Colorado they took the children has been taken off of youtube.com). He also gave a detailed account of going to a place that as described is the Bohemian Grove, a San-Francisco Men’s Art Club, where an effigy of a owl is burned and dignitaries such as the Bushes, Cheneys, and Colin Powell have all attended, and even Glenn Beck, who denied that he thought these powerful figures thought what they were doing was anything more than strange fun (discussed on his radio show around 2 years ago in response to witches praying against Trump), covered it in one of his books. The S&L scandals have been linked to the cover-up that was partially covered in the movie with Tom Cruise, American Made.

This man’s family can be found in his obituary (https://www.kruse-phillips.com/guestbook/3982635). Coincidentally, he has a son who does not live with his mother, and did not live with his father, but in Des Moines, Iowa. For any dear reader who feels a moral obligation to protect innocent victims, and families associated with innocent victims, please do what you can to ensure the safe outcome and truth to be told, whatever it may be. The biggest thing is to pray.  If you personally now someone who can be trusted, even with the enormous weight of a corrupt local, state, and national government bad agents, who will be unwavering in investigating and uncovering the truth and keeping the safety of remaining loved ones safe, then please proceed to uncover the truth.

Is it also possible that this is someone else who was taken, and forced to be a part of the the CIA’s MK-Ultra Program. The CIA operatives have been open in how the dark arts they learned could help them look years older, completely different, and do things they do not want to do. They are trained in how to take up different identities to influence those around them. At one time, the CIA wanted more robotic type agents and this is where we get the basis for the movie, The Manchurian Candidate. Also, the Nazis were interested in twins, and these psychiatrists were brought over as part of a program to integrate the mind control program into the CIA.

So, first, for those who haven’t seen this yet, there was a quick blurb on the American news network about State Department cover-up while Clinton was running it. Here is the link: http://www.telegraph.co.uk/news/worldnews/northamerica/usa/10114694/US-state-department-accused-of-covering-up-prostitution-investigation.html. This is an article detailing previous cover-ups with scandals by those working with or for State Department in 2012: https://www.cbsnews.com/news/state-department-memo-reveals-possible-cover-ups-halted-investigations/. And in case anyone wants it from Fox News as well, here is an article: http://www.foxnews.com/opinion/2013/06/13/did-hillary-clinton-champion-women-and-girls-ignore-reports-state-department.html.

Now, there is a great video from a journalist who is being interviewed in this video on when, how and what he knows about Pedogate: https://www.youtube.com/watch?v=QXfNOlToecw&feature=share

If you find this disgusting, please sign one of the petitions, such as this one: https://www.change.org/p/fbi-and-doj-need-to-investigate-elite-sex-trafficking-rings. More than anything, please pray and fight this disease! Spread the word! Don’t overcome evil with evil, overcome evil with good! Peace!

The controversy surrounding Arrington de Dionyso came about when some Reddit and 4 chan users found an old image of his mural from 2010 that he had painted at Comet Ping Pong. According to an interview with Arrington on 42 minutes at Sync Book (http://thesyncbook.com/42minutes/?ep=256), he asked to paint the mural the day before his band played the next day. He was given a ‘token’ amount of money and the paint to use. He explained to Douglas Bolles that Pizzagate came from trolls on Reddit and 4chan who looked through Podesta’s emails. According to his explanation some people in the Democratic party were careless with their email passwords and clicked on what was a phishing scam.

Although only having been there two times, he was able to confirm that there is no basement, despite Alefantis saying that is where they store their produce. However it is possible Alefantis was referring to his other restaurant, Buck’s Fishing and Camping nearby. He goes on to say it is fine dining pizza restaurant with all ages concerts, and this is confirmed by how Comet Pizza has always advertised their concerts. Also, he says that the concert part is a separate venue, but that you have to go through the restaurant to get to it.

In 2011, one year later, the restaurant had to paint over his mural because three ping-pong tables are moved out during the day, and all the balls hitting the wall eventually chipped away the paint. Since this was the first time he had painted a mural, he credited the “magical experience” with changing his art in making a painting of that size for the first time.

He explained that this art, to him, was fairly “innocuous” and that it had nothing to do with Satanism. Art, he said, is ambiguous and open to interpretation, although he never explained what the mural was actually supposed to be to him, except to say that he had painted a mythological landscape. In looking at his other art, it is highly sexual and he even admits to viewing sex as a way to open ones eyes and learn more about the universe, but that he only paints “consenting adults”. 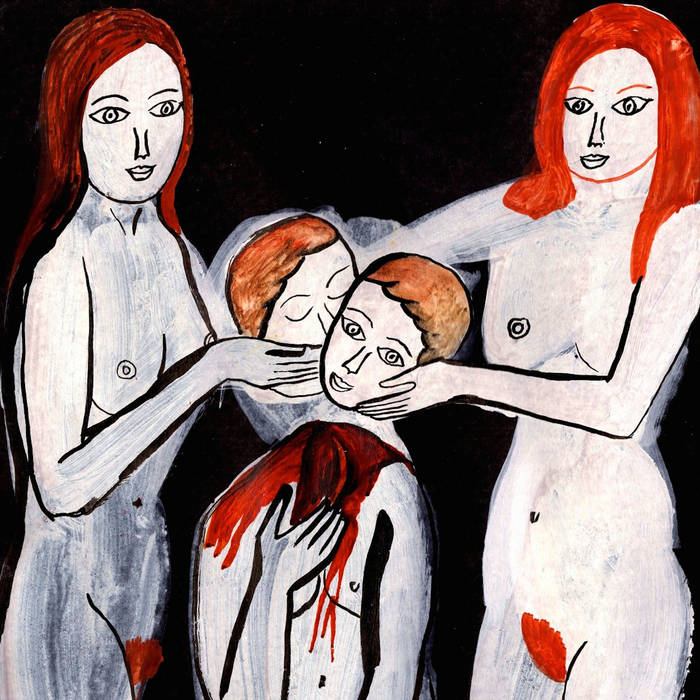 Interestingly enough, he labels this as more of an alt-right and neo-nazi type of witch hunt reminiscent of McCarthyism. This is because he perused sites where internet users were asking others to look for all age type concert venues, “safe places” he calls them, where nefarious activities may be going on according to them. However, he believes that Comet Pizza is not one of these “warehouse” type locations where illegal activities may be going on. He is very supportive of all ages venues as he benefited from going to actual art museums as a child, and here is his tweet announcing this concert as all ages: 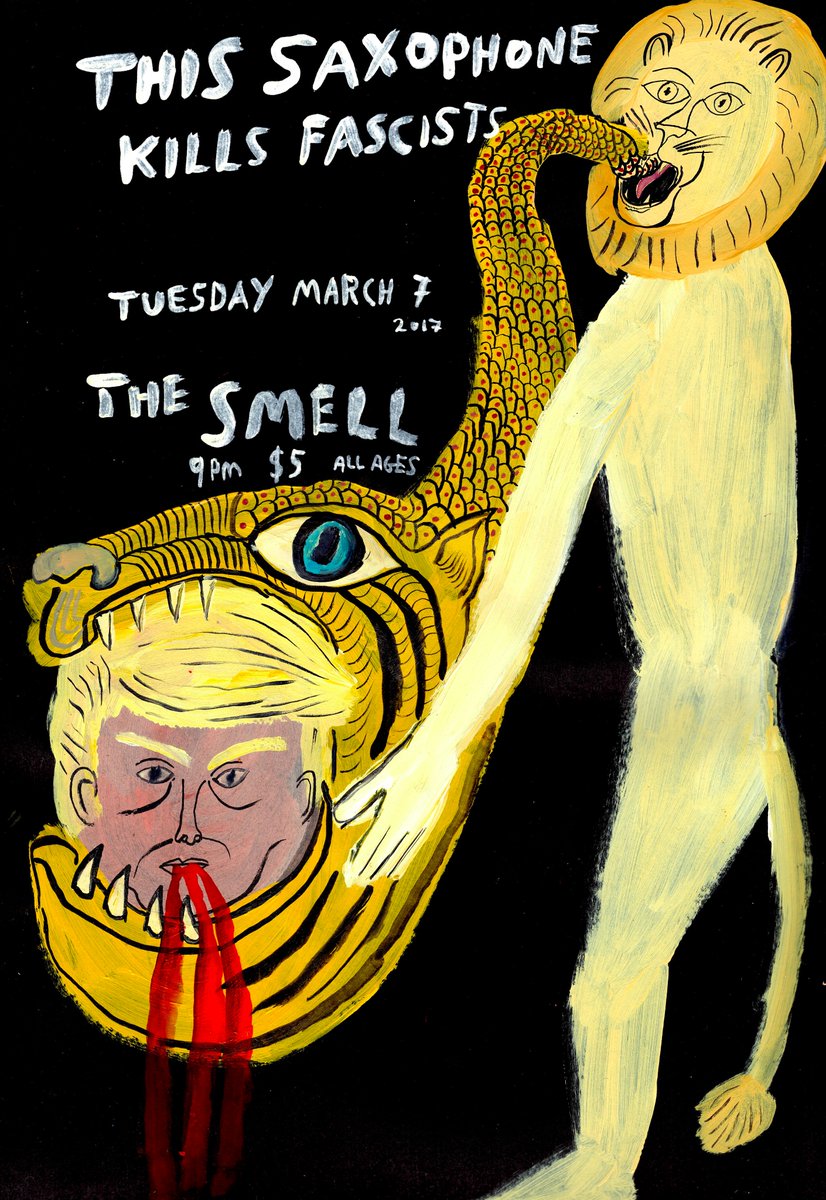 More photos of him and one with a couple young people making masks in a sketchy basement or some such room like that. http://livetaos.com/artsandentertainment/music/throat-culture-006-arrington-de-dionyso-throat-singerartist/